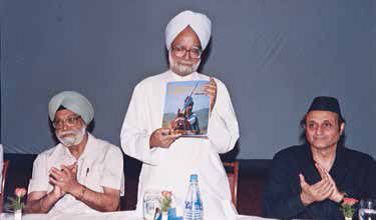 Dr Jaswant Singh Neki was Editorial Director of the Nishaan journal for a decade from 2005. In this (above) photograph he is seen with Dr Manmohan Singh (later Prime Minister of India) and Dr Karan Singh of Kashmir. The Nishaan was formally launched at New Delhi on 22 April 1999 when Dr Neki gave the keynote address in which he hoped that “all communities will join us in this dedication so that all of us together can create a new world, with a new vision and a great new future.”

Guru Granth Sahib repeatedly warns us that whoever and whatever is born must die: “Jo ayaa so challsee sabh koi aayee vaarye” (p.473). Furthermore, we have only one life to live.

An obituary, reckoning of a life, is not always easy to capture in words and some lives make it a daunting undertaking; today is such an occasion. Eulogies, for some people like Dr Jaswant Singh Neki, are an almost impossible task.

A wag reminds us that only two things are inevitable in life: death and taxes. Gurbani, and common sense, are clear that death must come to us all. With the many legal loopholes available around the world taxes are not quite the certainty they used to be. But from death none is spared; not those that are justly famous, not those that pass through life unknown, not

even those who are famous for just being famous.

Eulogy should help us visualise, indeed, capture a life, make us cry or laugh; certainly enjoy the persona under the lens, especially if your heart aches or there is a sense of loss at his departure. Life teaches us that none of us is perfect. Eulogies tell us how humans can be beautiful and yet imperfect.

Jaswant Singh Neki was one of a kind. A polymath and a first rate mind. He was a trained academic psychiatrist who nimbly climbed the ladder of his profession. He rose to enviable heights in his chosen bailiwick. In time he became a distinguished analyst of our needs, wants, obsessions, complexities and idiosyncrasies. He became Director of that premier medical institution in Chandigarh that imparted postgraduate specialty training to Indian medical graduates. I have run across many who graduated from there – clearly their academic standards

were first rate and a compliment to the students and faculty. He also spent some time in France and rounded off a distinguished career with a stint with the World Health Organisation. Essays within this Issue will explore his life journey in more detail.

Focusing on such professional achievements alone would diminish Dr Neki to a highly successful but exactly a one-dimensional scholar (shrink!) and that he definitely was not. When I met him in the 1970s, I was aware of his scholarly academic record. At that time my interest in Sikhi was somewhat embryonic, and that’s putting it charitably. Over the years I learned to appreciate a very different man whose work awes us even today. He was absolutely passionate about Sikhi. His achievements in and about Sikhi are destined to outlive him for posterity.

I find that people with a well-lived intellectually evolved life are few and  they lead a bifid existence. There is the passion of the profession that makes possible a satisfactory and rewarding life in the style that successful people emulate pretty much everywhere. But then there is another kind of life yoked to this and it provides the dimension of art, intellectual curiosity, artistic richness, philosophic depth and the like – while never neglecting the spiritual core of our existence. These are the two different dimensions to a good life: making a living and making a life. The two together moving symmetrically, like two oxen tethered to one plow, make for a fuller, richer and fruitful life. A talented and lucky few are then  remembered and celebrated as public intellectuals.

This is where I pigeonhole Dr Jaswant Singh Neki; this is where Dr Neki excelled. And I speak from the vantage point of one who helped edit the translation of his seminal work – Ardaas in English – and also participated with him at many a symposia on Sikhs and Sikhi over the years where we shared the same platform.

In a nutshell, and in lay terms, Sikhi speaks of reconstructing and  reconfiguring human behavior towards a more centered, productive and socially responsive life. Quite obviously there is then an overwhelmingly large perspective that is common to both behavioral science and religion when it is correctly understood and meaningfully practiced. This then became the driving force in Dr Neki’s life. And like a public intellectual in the style of cultural philosophers he wrote extensively about the Punjab as well as the underpinnings and teachings of Sikhi.

He was a prolific writer in both Punjabi and English. There are more than six books in Punjabi, a lot of poetry and also an autobiographic volume. Only two of his voluminous production appeared originally in English: The Spiritual Heritage of the Punjab commissioned by Guru Nanak Dev University and a small book titled The Pilgrimage to Hemkunt. He wrote that classic which  deconstructs the Sikh Ardaas line by line and traces the meaning and application of every word in the historic Ardaas. This has become an instruction manual for generations of Sikhs. It first appeared in Punjabi in 1989. A generation later, just last year he translated it into English. I am proud to acknowledge my own collaboration in editing it. It has already become a ‘go to reference’ for a whole generation of young Sikhs growing up in the diaspora, as well for many of their non-Sikh associates.

His books on Punjabi poetry have become an institution and won much praise and recognition with multiple of awards by the governments of Punjab as well as India, along with honorary degrees. In his younger, college days Dr Neki had a seminal role in the politics of the day. He, with assistance by his old friend Bhai Harbans Lal, briefly edited a newspaper at the behest of Master Tara Singh, the uncrowned Sikh leader of pre-independence times.

He also served as President of the All India Sikh Students Federation. I will not dwell on this chapter in any further detail here, and leave such matters to other contributors in this special issue.

In effect, I would say that Dr Jaswant Singh Neki has left us a treasure trove of writings. They have become indispensable to readers who are struggling to connect with the fundamentals and the joys of Sikhi. His writings transcend the age gaps that hold us back and often divide us: of language, culture, geography and generations.

As I see it, among the plethora of periodicals, newsletters and journals across the world that speak about Sikhs and Sikhism, two major publications appear from India. They are the Kolkata – based Sikh Review that appears monthly and has a track record of over 50 years, and the quarterly Nishaan from New Delhi that has just celebrated its fifteenth years. Each publication is outstanding in its own unique way and  they are absolutely not copycats of each other. If anything they are ‘kissing cousins’ that cover the worldwide Sikh presence with articles, news and relevant snippets of our 25 to 30 million strong community. And the two are as different as night and day from each other in content, style, presentation and readership. The two complement each other wonderfully and present a thoroughly comprehensive and coherent view of the world of Sikhi. And I am honoured, privileged and  happy to tell you that both Dr Jaswant Singh Neki and I have served for many years as members of the Editorial Boards of both journals. We never saw any conflict in serving these two masters (media) in the interest of our community.

Jaswant Singh Neki is no more but I assure you that he will be missed by both Nishaan and the Sikh Review and their very loyal readers. After expending much verbiage on the life of our friend and mentor Jaswant Singh Neki, the question that we resolutely face is how to really take the measure of such a man. How would he like to be remembered? How we think he deserves to be remembered? Each of us must answer for ourselves so I leave the judgment to readers.

But I want to leave you with a yardstick that comes from the Guru Granth Sahib. Guru Amardas (p.921) posits the question while challenging us tersely and bluntly: “Eh sareera merya iss jug meh aaye ke kya tudh karam kamayya.” To me, a meaningful, but not literal, translation nudges us awake with an admonition, “At the end of the day what footprints will you leave in the sands of time.” Each of us has to answer the Guru’s challenge for ourselves.

I submit to you that Jaswant Singh Neki’s footprints are unquestionably larger than life. He strode like a colossus and did much good by his walking. We would do well indeed if we stepped into those footsteps to explore where they lead us.

Dr Neki lived a full life most productively. He was 90 when he moved on. I interpret the Sikh concept of Hukum as living life fully in the Creator’s grace – in the moment – neither in the past nor for an unknown future.

Such a life deserves and asks to be celebrated, not mourned. How to build on his legacy, not to merely ape or mimic it, is now our onus. That would be the definition of moving forward. In the final analysis, I celebrate Dr. Jaswant Singh Neki’s life and his many writings simply because they connect Sikhs to their best hopes, not to their worst fears, to our confidence in the future rather than our doubts. Our past has been glorious; our future will be no less.

The SIKHI ARDAAS: For Humanity

Borrowing from scholars of Sociology

Borrowing from scholars of Sociology