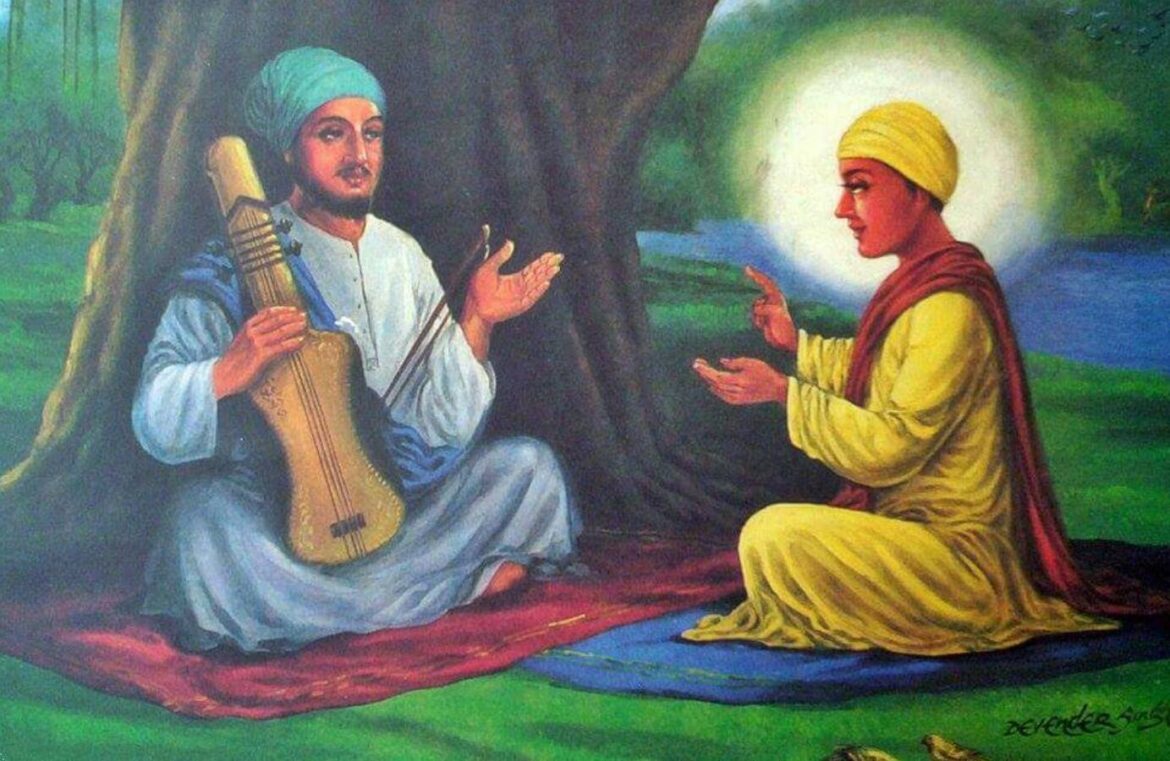 Bhai Mardana (1459-1534), Guru Nanak’s longtime Muslim, who also accompanied him throughout those extensive Udassis (journeys) across the country and abroad, was born as the son of a Mirasi couple, Badra and Lakkho, of Talvandi Rai Bhoe, now Nankana Sahib in Sheikhupura district of  present Pakistan. The Mirasan were a caste of hereditary minstrels and genealogists. Guru Nanak and Mardana were both born and raised in the same village. The Miharban Janam Sakhi describes the latter, who was ten years senior in age, as the Guru’s companion since his childhood days and as one who sang to him songs from Kabir, Trilochan, Ravidas, Dhanna and Bern. According to Ratan Singh Bhangu, Prachin Panth Prakash, Guru Nanak when still a small boy, gave Mardana a string instrument improvised from reeds to play on while he sang the hymns.

It is said that Lakho had six children who had died during birth, and she named this seventh child as ‘Marjana’ (the one who dies), but Guru Nanak started calling him ‘Mardana’, meaning ‘Marda – Na’ (the one who wouldn’t die), which is the basis of his unusual name.

As Guru Nanak was employed to take charge of the granaries and stores of the Nawab of Sultanpur Lodhi, the stories of his generosity and hospitality spread far and wide. Mardana, already a married man and father of two sons and a daughter, wanted to visit Sultanpur and seek employment but was charged by Guru Nanak’s father Mehta Kalu, to bring news of his son. Mardana went to Sultanpur and was never to part company with Guru Nanak again. His occupation was playing the rabab or rebeck as Guru Nanak recited hymns on God’s glory.

When Guru Nanak prepared to go forth into the world to preach his message, he invited Mardana to accompany him. Mardana initially hesitated for he did not wish to leave his family until his daughter had been married off for this he did not have sufficient means. One of Guru Nanak’s disciples, Bhai Bhagirath, arranged the wherewithall and Mardana was able to give away his daughter in marriage, and then was ready to accompany Guru Nanak on his travels. It can be said that Mardana was a most fortunate soul who benefited the heavenly presence of Guru Nanak, who according to the Bhatts (GGS) had ‘darshan’ of the Almighty.

Anecdotes and tales of intrigue, humour, spirituality and the spread of Sikhsim abound in biographies of the first Sikh Guru, Guru Nanak Dev ji and his aide and companions, Mardana. As per that from the Puratan Janam Sakhi, Guru Nanak and Mardana had not travelled very far from Sultanpur when the latter complained that he felt hungry and needed something to eat immediately. The Guru pointed to the village they had passed and said that if he went there, he would be well entertained by Khatris of the Uppal caste who lived in that village.

Mardana went in that direction and upon arriving in the village, found everyone more than hospitable. He was sumptuously fed and given ample alms. As he saw him return loaded with a bundle, Guru Nanak, as per the Janamsakhis, started laughing. Mardana realised the oddity of what he had done and did not know how to get rid of what he had collected. He threw the bundle away when the Guru pointed out to him that those articles would be more of a burden on him.

It is written in the Janamsakhis that after considerable search for the ‘right sounding’ Rebab, which could not be found anywhere, Guru Nanak sent Mardana to the house of Bhai Firanda of Bhairowal (Kapurthala).

Bhai Firanda was an accomplished musician and was a carpenter by trade. He presented a special Rebab to Guru Nanak, which sounded like Tu hi Nirankar, tu hi Nirankar (a divine melody in awe of the Almighty). Guru ji was very much pleased with Bhai Firanda and bestowed upon him boundless blessings.

Guru Nanak started on His divine journeys in 1497 AD, and along with Mardana, His first stop was at Bhai Lalo’s humble house at Saidpur (now Emnabad in Pakistan). Here Guru ji meditated for nearly a year, bearing the pain of stones, sand and thorns upon which he sat.

There are a number of very interesting ‘Sakhis’ (stories) connected with Bhai Mardana, who was with Guru Nanak in his four divine journeys, which are depicted in paintings.

The Janamsakhis contain many anecdotes picturing Mardana in despair from agonising hunger or impending fear and Guru Nanak, or Nature, coming to provide him succor, somewhat miraculously. Once the two were passing through a remote wilderness when suddenly a violent storm overtook them. So severe was the tempest that the trees of the jungle began to flay about. Mardana, trembling with fear, thus spoke to the Guru, “True sovereign, thou hast brought me to my death in this forest. I shall not here get a shroud nor a grave.” The Guru asked him to remain calm, but Mardana moaned, “I have not faced a calamity like this in my life. What is

going to befall my poor soul today?” Then fire broke out engulfing the forest in a smoke. Mardana covered his face and laid himself down on the ground saying, “Farewell, life.” Soon, thick clouds gathered overhead and it started pouring torrentially. “Raise thy head, Mardana,” spoke the Guru, “and take thy rebeck.” Mardana tuned the strings and Guru Nanak sang: “If the fear of God is in the heart, all other fear is dispelled…”

According to Puratan Janam Sakhi, Mardana and the Master were once taken prisoner by the Mughals at Saidpur. The Guru was given a load to carry on his head and Mardana to lead a horse holding its rein. Mir Khan, the Mughal commander, saw that the Guru’s bundle was floating a cubit above his head and Mardana’s horse was following him without the reins. He reported the miracle to Sultan Babar, who remarked, “Had there been such faqirs here, the town should not have been struck.”

There is some dispute among historians regarding the place where Mardana passed away but it is believed that in 1534, he fell ill and died in Baghdad on the return journey (udasis) from the east. With a heavy heart Guru ji performed the obsequies of Mardana with his own hands. A humble monument was erected in memory of Mardana.

Within an enclosure on a wall an inscription in mixed Turkish and Arabic marks the site. Mardana was called Murad by the residents of Baghdad and being older than Nanak by ten years was considered as Guru. Consequently the inscription which was put up after Guru Nanak’s departure has: “Guru Murad died.

Baba Nanak faqir helped in constructing this building, which is an act of grace from a virtuous follower, 927 AH.” Mardana appears to have died in December 1534 at the age of 75. The monument lies near a graveyard, 2.5 kilometres away from the railway station. Upon the Guru’s return to Punjab, Guru ji informed and consoled Mardana’s son Shahzada, and other members of his family and asked them not to weep for Bhai ji as he had returned to his heavenly home.

Still, there are different versions of this. In the Paira Mokha Janamsakhi, it is written that Mardana passed on in Afghanistan, during Guru Nanak’s fourth journey.  He was cremated near the River Kuram in the City of Khurram, another version is that he came back with Guru Nanak and died in 1538/1539 AD) at Kartarpur, eight days after Guru Nanak’s passing.

Mardana was not just a musician but also a spiritually elevated soul. Three of his hymns are included in the Adi Granth under Raag Bihagra. These hymns denounce drink that engenders evil passions and upholds meditation of the Divine Name that creates a spiritual inebriation.

Bhai Mardana had two sons, Rajada and Shajada. Shajada stayed at Talwandi, but Rajada came to Kartarpur. Sajada used to sing at the Darbar of Guru Angad. There were two sons of Sajada, Banoo and Saloo, who were the Darbari Ragis of Guru Amardas and Guru Ramdas. Their son Balwand and his son Sata were the Ragis who sang in the Darbar of Guru Arjan.

Mardana was a poet of some merit. One of his salok appears in Guru Granth Sahib in Bihdgare ki Var along with two others of Guru Nanak’s addressed to Mardana. He is convinced that an evil body may be cleansed of sin in sangat (GG, 553).

Mardana is the only Sikh disciple who was permitted to use Guru Nanak’s name in his hymns. Guru Angad called himself Nanak the second while Mardana called himself Mardana Nanak 1. There are three hymns of Mardana in the Guru Granth Sahib. One hymn of Var Bihagra is on page 553 :

In the vat of the body, Egoism is the wine.

Desire and low cravings are its companions.

The cup of ambition is abrim with falsehood, and the god of death is the cup bearer;

By drinking this wine O Nanak, one gathers multiple sins.

Make knowledge your yeast, the praise of God the bread you eat and the fear of God your meat.

This O Nanak, is the true spiritual food. Make divine Name your sustenance.