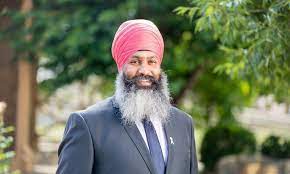 On 14 November 2022, a 41 year old Sikh Amar Singh was honoured with the New South Wales Australian of the Year award for supporting the community impacted by floods, bushfires, drought and the Covid-19 pandemic. Amar Singh is the founder and President of  ‘Turbans 4 Australia’ — a charity organisation that assists people facing financial insecurity, hardship, homelessness and those impacted by natural disasters.

Amar Singh and his team are also teaching people in cities across Australia about the Sikh community via their Turban Fest events. “By tying turbans on people’s heads, we create an opportunity to chat with our fellow Australians and show them that our turbans and beards are nothing to fear,” Singh said in his community website.

In the past, Singh has volunteered during the Sydney 2000 Olympic games, Invictus games, and Gold Coast commonwealth games. Since its inception in 1960, the Australian of the Year awards honour an exceptional group of highly-respected Australians who ignite discussion and change on issues of national importance. Apart from Singh, there are four other recipients of the award from NSW, who will come together with awardees from other states for the national awards ceremony in Canberra on January 25, 2023.

Delhi Gurudwara Shelters 44 Sikhs Who Were Among...

Tribute paid to the 2 Sikh Regiment on...

Ensure no discrimination against Sikh students :...