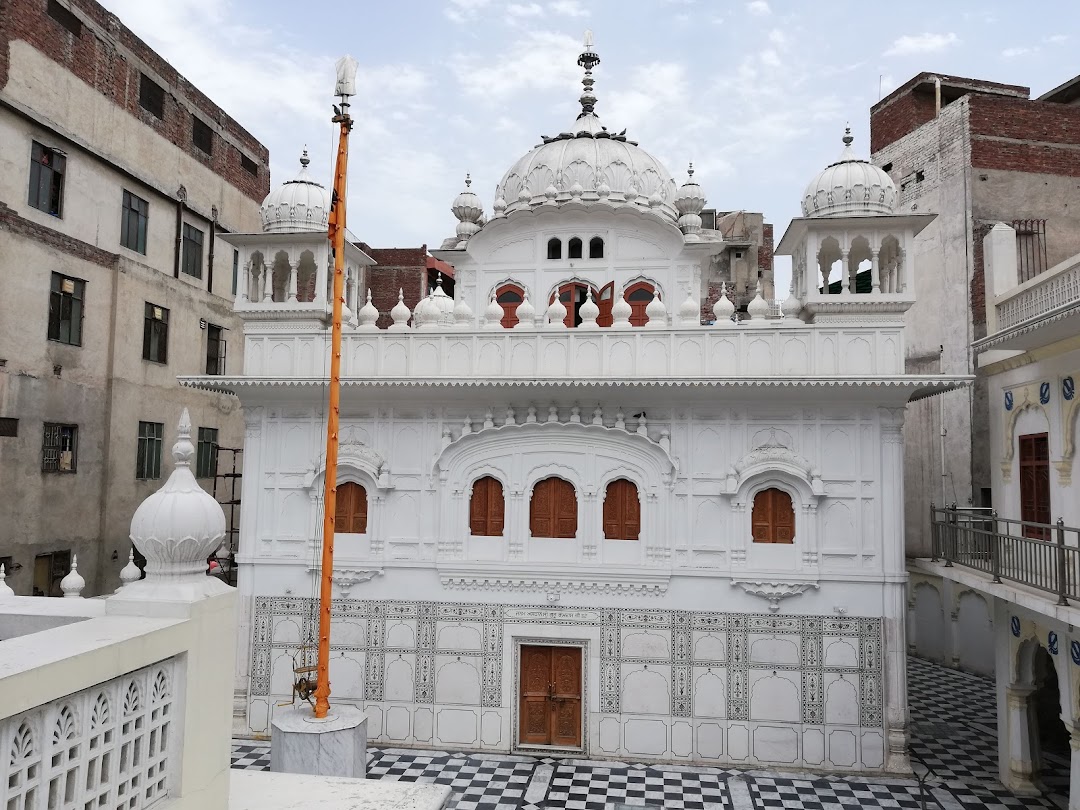 Imagine the joy of visiting the shrine of Baba Farid in Pakpattan, where your ancestors served

Baba Farid more than 750 years ago, imagine the ecstatic feeling of stepping on the land of Guru Nanak Sahib where he was born and passed away, imagine visiting the Gurdwara in Lahore’s Chuna Mandi where Siri Guru Ram Das Sahib was born, imagine praying at the Gurdwara where Guru Arjan Sahib was martyred, getting goose pimples when visiting Gurdwara Shaheed

Singh Singhnian near Lahore railway station, where Sikh mothers were garlanded by Mir Mannu with the decapitated bodies of their own children.

of the Lion of Punjab, imagine discovering your maternal ancestral home late at night in Lahore,

to see your maternal grandfather’s name outside the house waiting for someone to come back and reclaim its identity.

Imagine visiting Aitchison College in Lahore, where your grandfather and father studied, and imagine the circle of life that leads back to your ancestral home through which your paternal grandparents walked out in 1947 never to return but you kiss the door walking back inside as a way to honour the promise of goodness of humanity.

The list goes on — but you get the point. It was a roller coaster of sad, poignant and moments of hope and loving kindness for me.

I was born in October 1965 in East Punjab (Chardah Punjab) at a time when my father and several of my uncles, who were in the Indian armed forces were at war with Pakistan. I grew up being told that Pakistanis were “evil”, no exceptions and with prejudiced stereotypes, that Muslims were “unclean”. I now realise that I was being indoctrinated in the patriotism of hate. Patriotism of hate is the love of your country based on the hate of another country – in this case Pakistan. The Islamaphobic comments by family and friends were casual and usually said with

humour to rub it in. I traced most of these prejudiced feelings to the bloody 1947 partition of the Punjab by the British, which drew an arbitrary line through the heart of Punjab dividing people who had lived together, parting Lehnda (west) from Chardah (east).

These were my thoughts as I landed at Allama Iqbal International Airport in Lahore. The taxi driver who picked me up asked if this was my first visit to Lahore. As soon as I said “yes” he quipped “jinae Lahore ni vaikhya o jamia nahi”. At that moment, I knew that I had been re-born!

The hospitality of Pakistanis was overwhelming. Restaurants would not take money, Uber drivers refusing fare, “Sardarji” said with love and affection, the trolley guy at the airport shouting “give way to Sardarji” in perfect Panjabi. The examples can go on and on. The one I remember most fondly is when I was chatting with a Maulvi while both of us were eating kulfi at the famous Yusaf Faluda shop in Gawalmandi of Lahore. When I got up to pay, the

halwai informed me that the Maulvi Sahib whom I was talking with had already paid my bill and left.

I was being drowned in hospitality and kindness: nowhere else in the world have I experienced such respect. If it were up to my hosts, they would even have lifted me up on their shoulders!

covered head to toe in burqa, unlike what much of the western media portrays about women in Pakistan.

Some women had covered their head in public with a chunni or scarf but faces were not covered. I met many women on my trip and found them to be inquisitive, balanced – and very perceptive.

Some of my most interesting conversations were with people such as the Uber driver, restaurant cook, guard, waiter and best of all, Bacha, the mighty old Pathan outside my hotel who polished my shoes, all people making a living to raise a family with dignity of labour. I did not meet any person, not one, who bad mouthed the country of my birth. Instead I heard a sense of appreciation that India had progressed significantly and they hoped that Pakistan would

also do the same.

But in my conversations, I heard something much deeper. I heard the common person talking

about how Pakistan had learned valuable lessons from its experiment with Islamic fundamentalism and that religious nationalism was not the way for their country. I reflected on their comments which sent shivers down my spine as I thought of the bigotry prevalent in the world’s oldest and largest democracies of the world. Both India and the United States have

to imbibe lessons from Pakistan’s tryst with religious fundamentalism.

More than 120 hymns of Baba Fariduddin Ganjeshakar are enshrined in Guru Granth Sahib, holy scripture of the Sikhs. As Sikhs, we consider his Bani as also the Word of God. Visiting his shrine in Pakpattan last December made me ecstatic.

visited Pakpapttan in 1256 AD and held a one year long langar (community kitchen) there, for which Baba Farid blessed the family with the honorific title of Bhandari.

I listened to the qawalls there in an open courtyard, loudly singing a shalok from his Bani:

apnarae giraewan mai sir niva kar dekh (look humbly into your own self first). Then was time for langar which we were graciously invited to partake. We sat on the floor in lines on mats

(as at Sikh Gurdwaras) and were served a simple meal by volunteers just as my ancestors had more than seven centuries back. We ran short of plates and so I ate with our driver Nawaz : some of my fellow Indian family and friends would have been mortified to see me eat out of the same plate as a Muslim !

As a child, my grandmother would relate to me the same story many times: how during the bloody partition on 1947, they had left our ancestral haveli (mansion), which had a black peacock painted outside it, in village Butala near Gujranwala, never ever to return.

time, I was perplexed. There were three havelis of the family. I was keen to visit the one in which my grandparents lived. And then I saw on the front wall of one of the havelis: a fading black peacock made of black bricks! My heart ached and reminded me of my grandmother’s stories and her warm touch. My grandparents had walked out from these very doors

72 years ago, never to return.

I was here to complete the circle of life: so with tears in my eyes and prayers on my lips, I kissed the door floor beam and entered within. The haveli is very well maintained and is now an Islamic school for girls, a place normally where men are not allowed in. The Mullah of the village accompanied me in an interfaith spirit into the building for a guided tour.

While visiting my family ancestral home, I pledged to not let the hate of the partition eclipse the

love of humanity. Hate is like taking a poison pill that kills you but not does nothing to the object of hate. I have learned this lesson late in life but better late than never.

My visit to Nankana Sahib was immensely emotional. Reading from Guru Granth Sahib installed at the Gurdwara where our founder Guru Sahib was born was indescribable. At Nankana Sahib, I tried to talk with the local Sikhs there in Punjabi but was astonished to learn that they only spoke in Pashto or Urdu. Later I found out that most Sikhs who now live in Lehnda (west) Punjab around historical Gurdwaras are not Punjabi Sikhs, but are Afghani Sikhs who migrated, when the Taliban ravaged Afghanistan. It was a sad feeling that I had to communicate with my faith’s brethren in Urdu and not our native language, Punjabi.

And then came the visit to Kartarpur Sahib : what an amazing interfaith gift of Pakistan to the Sikhs! I could not imagine such a beautiful place of worship where Guru Nanak Sahib settled after his extensive travels, farmed here, and passed away here. The complex is huge with the old central shrine kept as it was. I entered the Gurdwara Sahib and went upstairs to the worship hall. Half way through the service I realised there were no Muslims inside the central shrine. On the way out, I approached the Sikh guard and inquired. His response floored me: “no Muslims

allowed inside the central shrine”. I could not believe it ! I responded that this was not what Guru Nanak Sahib wanted. He responded that Muslims took too many photos upstairs, to which I responded that some Sikhs who were upstairs with me were no better, were intrusive in taking photos and videos walking around in between people.

I felt that this was being used as an excuse to exclude Muslims from entering the central shrine. I

now realised why my Muslim friends accompanying me from Lahore had politely volunteered to stay outside: they probably knew about this bigoted rule and hence complied with which I was unaware. The solution is simple: don’t allow photography inside the central shrine as is the rule at Darbar Sahib in Amritsar and many other historical Gurdwaras in the “other” Punjab.

I walked out of the central shrine making a pledge to myself that I would not return here till people of all faiths, including Muslims, were allowed equal access as were Sikhs, so drawing a line in the sand of my own conscience. There after I partook of and served langar and then

headed to an exhibition hall. I was thrilled, to see the writing of Afzal Saahir in Gurmukhi in artistic style, one of the finest Panjabi poet of West Punjab. I had met him just a few days ago at Lahore’s famous Pak Tea House. Walking through the exhibit a huge Kara (a

bracelet which is one of the five articles of our Sikh faith) on sale caught my eye. I could not take my eyes off it. I bought the new Kara, removed the one I had worn for over 30 years and put on the new one. I then offered my old Kara of 30 years to my friend Jahandad Khan who had accompanied me on the trip. I offered it to him as a symbol of our friendship and brotherhood knowing well that our ancestors, the Tanoli and Butalia clans had fought many battles in the early 1800s, on the opposite sides.

This was my way of making peace with the past that can still haunt us emotionally. Jahandad graciously accepted the Kara and put it on. We all believe in stories, some good and some

Having been reborn in Lahore and with my journey coming home to Lehnda Punjab ending, as

I boarded my return flight, I felt that I was leaving a part of my heart behind. which is what home is : a place where your heart lives.

Borders are man-made arbitrary lines that exist but matter only if you believe in them. Let the Punjab be no more divided into Indian Punjab and Pakistani Punjab. The line between Chardah and Lehnda Punjab cannot break our kinship which goes back to aeons, and this is where our hope and future is.

Dr Tarunjit Singh Butalia has deep ancestral roots in what is today’s Pakistan, going back about eight centuries. He visited Lehnda Punjab for the first time in late 2019. The author is presently the Executive Director of Religions for Peace USA and is on the Board of the Parliament of the World’s Religions, North American Interfaith Network, and Sikh Council for Interfaith Relations.

Home of the Beloved