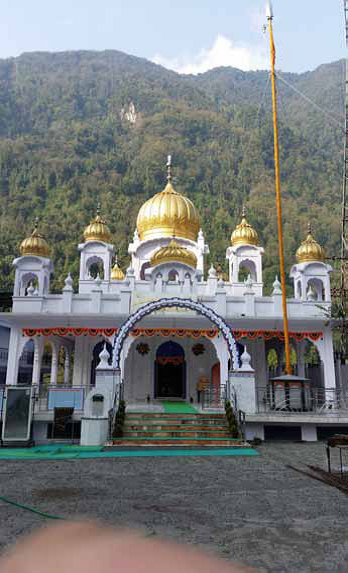 This wonderful and historic Gurdwara in the high Himalayas is at Chungthang, in North Sikkim at the confluence of two rivers Lachen and Lachung Chu, both tributaries of the River Teesta.

The thumb-shaped state of Sikkim borders Nepal in the west, the Chinese Tibet Autonomous Region to the north and east, Bhutan in the south-east and the state of West Bengal to its south.

Chungthang is some 95 kilometres from Sikkim’s capital Gangtok, and the lake Guru Dongmar is at a height of 18,000 feet, alongside a glacial peak known by the same name. The lake remains frozen most of the year, experiencing heavy snowfall for almost six months a year. It is believed that Guru Nanak Dev ji covered this area during his visit (Udasi) to China and Tibet and met the Karma pa Nying ma pa sect then being hounded out from Tibet by the Ge lug pa sect. It is also said that Guru Nanak, on one of his journeys, had subdued two demons here before proceeding. The footprints of that event were believed to be still left on that cordoned off rock.

Guru Nanak Dev ji dug his walking stick at a place where eventually the stick has grown becoming a tree which has trunk in stick shape and leaves are below the rounded trunk which looks like handle of stick. An amrit kund was also made to appear there by Guru ji.

Many of the Karma pa Nyingma pa sect are followers of Guru Nanak, with their Head Lama becoming Guru Nanak’s follower in Kailash Mansarovar after Guru Nanak’s discussions with the famous Sidhas of the age. This sect had fled from Tibet to the Himalayas in Northern India, which encompassed Ladakh, Himachal Pradesh, Uttarakhand,Nepal, Sikkim, Bhutan, and Arunachal Pradesh. Guru Nanak visited all these states around 1516 AD. After his visit to Kailash-Mansarovar, Guru Nanak returned along the Kali River and went to Nepal, where the Gurdwara at Kathmandu, on the banks of river Bishnumati commemorates his visit.

Visiting various religious places in Nepal, he crossed over to Tibet through Nathu la and reached the Sakya monastery. The earlier king of Tibet from Karma-pa sect was, by then, deposed by the Ge-lug-pa sect but was still holding on to this monastery. Guru Nanak helped Trasung Deochung reconstruct this monastery and was honoured with a robe which is preserved in Lachen Gompha.

From Tibet, Guru Nanak entered Sikkim through Chhorten Nyi ma la. Passing through Dolma Sampa and Tongpen, he entered the Muguthang valley where he visited Kedang, Bendu, Sherang, Lyingka, and Muguthang. He went through Naku la and Lawu Gompha and reached the plateau around Guru Dongmar.

In this plateau the yak grazers had begged Guru Nanak for help them to get water as in severe winter, the lake freezes with temperatures falling down to minus 35 degrees. The Guru struck the perpetually snow-covered Guru Dongmar Lake with his stick, the ice melted giving way to crystal clear water. Ever since then water of the lake has never frozen. The lake and the hill feature atop have come to be known as Guru Dongmar Lake and Hill respectively, the names recorded in maps prepared by British surveyors in the nineteenth century.

Some grazers then projected another problem to Guru Nanak. Owing to high altitude, their virility was affected, and requested the Guru for help. Guru Nanak blessed the lake, saying, “Whosoever takes the water of this lake will gain virility and strength and be blessed with children.” The people of the area have firm faith in the Guru and consider the water of the lake as nectar (amrit). A Gurdwara was constructed here in the 1980s to commemorate Guru Nanak’s visit to the place. The local people of the area and Lamas of Karma-pa Nyingma-pa Sect regularly visit Darbar Sahib Amritsar, to pay obeisance to their beloved Guru Rimpoche, Guru Nanak, whose footprints, a robe and a water-carrying utensil (kamandal) are preserved in Lachen Gompha, Sikkim, commemorating his visit to the place.

From Gurudongmar, Guru Nanak went to Thangu, Lachen, Chungthang, Lachung, Yumthang and Pyakochin. Around the Chungthang Gurdwara, a tree has grown at the place where the Guru’s walking stick had struck, along with footprints of the Guru, a spring, and the rice-fields blessed by Guru Nanak commemorate the holy visit. At Pyakochin, an engraving on stone, in Gurmukhi script, was earlier preserved to commemorate the visit of Guru Nanak. From Pyakochin the Guru is stated to have crossed over to the Chumbi Valley through Ghora-la, enroute to Bhutan.

The present Gurdwara structure was built by officers of the 17th Assam Rifles and Indian Army personnel with help of the local Lepcha tribe in the early 1980s. The area was restricted to service personnel and local people owing to its strategic location near the border with China. On 24 April 2005, The Tribune newspaper reported that the Gurdwara Nanklama at Chungthang Sikkim had been opened to public and devotees. The Gurdwara had been constructed following research done by the head lamas of Buddhist monasteries  (gomphas) at Fudong, Chungthang, Lachen, Lachung and Thangu and all the local people, and with their enthusiastic help.

They local people continue to pay obeisance at the Gurdwara with reverence, and in recent times, groups of Sikh pilgrims have been visiting the gurdwara annually and have always  had goodwill of the local people and return with wondrous memories.

Extracted from ‘Travelogue to Chungthang and Gurdwara Nanaklama’ and images by Gobindar Singh Chopra.

A Portrait of Courage: The Sikh Regiment...