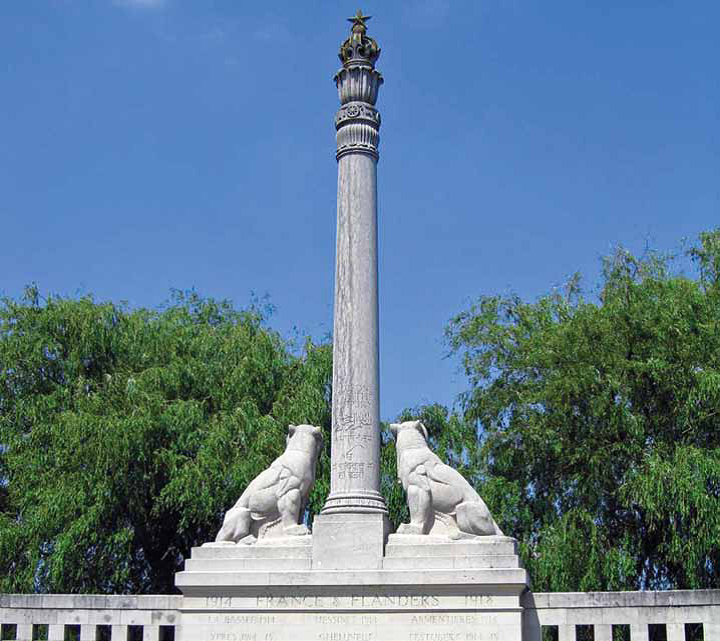 There is something unique and central in the faiths that the men-in-arms professed to have made it incumbent upon men of different religions Christian, Sikh, Muslim and Hindu to have lived and fought and died together”.

Thus wrote Major General Mohindar Singh Chopra, founder of The Jullundur Brigade Association in 1989, at the 75th anniversary of the first battle of Neuve Chapelle.

25 years later, those emotive words were recalled at the centenary of that epic battle by Brigadier Peter Rafferty of the British Army and Colonel of the Duke Of Lancaster’s Regiment, ‘the Lion’s of England’, who led the ceremonies at the Indian Army Memorial at Neuve Chapelle in northern France. This was on 28 October 2014, exactly 100 years after that historic battle where the 47th Sikhs of the (8th) Jullundur Brigade of the (3rd) Lahore Division particularly distinguished themselves.

As the Brigadier stated:

Today we are commemorating the actions of the Jullundur Brigade at Neuve Chapelle in 1914. The Brigade, which was then part of the Indian Army, included one of our antecedent regiments, The 1st Battalion, The Manchester Regiment, along with what is now 5th Sikhs and 1st (Scinde)Frontier Force Regiment, from current day India and Pakistan respectively. Indeed, to this day these Regiments remain affiliated and The Duke of Lancaster’s Regiment retains our links with both the Sikhs and FFR.

Significance of the Commemoration

Brigadier Rafferty spoke on the significance of the commemoration Not only does our commemoration allow us to mark the exploits of our forebears, but it also provides an opportunity to link with some of the local ethnic communities in the North West of England for educational and community engagement benefits:

• The configuration of the Jullundur Brigade, encompassing British, Indian and now Pakistani successor Regiments, as well as the multicultural (ethnic, religious and ritual)complexion of the Brigade, representa microcosm of British society today as in evidence in many of our county towns and cities and the communities from which we now recruit.

• There is clear resonance between the UK Government’s aims and objectives for the centenary celebrations to be reflective, educational and relevant to our modern society with the celebration of an episode in our Regimental history in which British and Commonwealth soldiers stood together side by side for the common good.

• Since that time a significant number of British citizens of Indian and Pakistani origin have settled in our Regimental area; some may have had relatives from older generations who fought in the Brigade; these “golden threads,” allied to the healthy and ongoing affiliations between the modern Regiments, represent today, as then, the very strength of our shared Commonwealth values.

Participation at the Commemoration

“We are glad that we are joined at our Regimental Commemoration by civic leaders, school children and representatives of ethnic and religious communities who made up the Brigade. We also welcome our French Civic Guests, Army Cadets and Sikh re-enactors. We will seize this opportunity to demonstrate that the spirit of collaboration, mutual trust and respect, shown by the Battalions of the (Jullundur) brigade a century ago is still as relevant and cherished today as it was then.

The bugler then sounded “Fall In”, the colours were marched in, the service introduced by the Chaplain of the Second Battalion the Duke of Lancaster’s Regiment, the Reverend Dr Simon Bloxam-Rose, CF and the first hymn was sung :

Letter from the Front

Then followed three readings from representatives of the Hindu, Muslim and Sikh communities, the latter represented by Gulab Singh MBE in the form of a letter from the parents of a Sikh soldier in the Trenches on the Western Front.

After a lifetime and a half of searching, we have at last found you. You are no longer an invisible face amongst the alphabetically dead, another body draped out to dry on the blood-stained barbed wire. Now at last we can honour the selfless courage of our beloved Sikh soldier.

We cannot begin to imagine how it must have felt to leave the plum and orange sunshine of the Punjab for the spectral black and white shadows of war. The cold trees that stood sentry over you as you lay waist-deep in mud and maggots, with only the death-tipped shooting stars for company as they spat holes in the velvet canvas of night. No helmet for you, honourable son, to protect you from the shells that whistled overhead.

Instead you chose to fight and die with your turban, your faith intact amidst the shattered corpses. We told you that the war in Europe would make a man of you, little realizing that it would make you a hero. If you had known that you were to be baptized in warm blood and rain, would you have been so eager to serve the King?

We suffered drought and famine in India over those hard war years. Our crops died in the fields and so did our boys. We waited to hear from you; not wanting to believe that you were experiencing an even worse fate. Perhaps it is just as well that we didn’t receive more than the occasional heavily-censored letter from you.

You wanted to tell us that your ears were deafened by the sounds of shells, your mouth silenced by the blood of battle, that young men of every colour and creed were being butchered like animals…. If we had known all this, then we would have agreed that there was only one way back to the Punjab. When we accompanied you to the recruiting centre we didn’t know that you were heading for a land that we had never heard of, let alone that you would be fighting an enemy that did not even threaten our peace. You willingly fought for a power that occupied our own land. Yet that is the legacy of Empire – complete strangers are hurled into the cauldrons of war.

We will never forget you, our Khalsa lion, who roared into battle and surrendered his life at the click of God’s fingers. We will not neglect your memory and allow your sacrifice to become meaningless. Your battle cry is the thunder that rumbles through time, your sword is the lightening that cuts to the quick. Your body may sleep, but never your memory.

At conclusion of the readings the Padre said: Let us pray. Today we offer in proud remembrance those of the Jullundur Brigade who gave their lives and are remembered in this special place. May their memory live forever, and may we never forget the supreme sacrifice they made.

The Regimental Sergeant Major, 2nd Battalion the Duke of Lancaster’s Regiment, concluded.  They shall grow not old, as we that are left grow old. Age shall not weary them, nor the years condemn. At the going down of the sun and in the morning, we will remember them.

All present then repeated : We will remember them! The poignant Last Post was played on the bugles followed by the Reveille. Wreaths were then placed at the Memorial by the Colonel of The Regiment, representative of the Indian Army, French dignitaries and the Faith representatives. The scores of children from north west England schools presented posies at the Memorial, before the colours were marched off.

It was perhaps divinely ordained that Jathedar Keshgarh Sahib from Anandpur Sahib in the Punjab, Singh Sahib Mal Singh, visit the Indian Army Memorial at Neuve Chapelle that very morning and conduct the Ardaas to bless those who gallantly gave up their lives in battle one hundred years before.

The Sikh Community of Paris, who had prepared an elaborate langar for the many hundreds

visiting the Indian Army Memorial at Neuve Chapelle on that cold and windy morning, then served naans and vegetable curry to the visitors, followed by halwa and cups of hot tea.