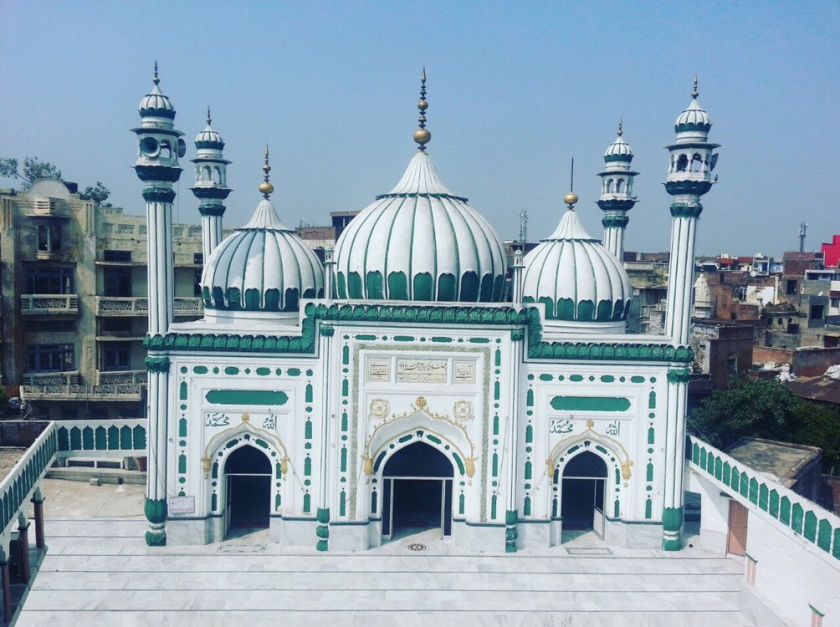 Established by Guru Ramdas, Amritsar owes its name to the sacred tank (amrit sar or the pool of nectar) at the centre of which was laid the foundation of the holiest of Sikh religious shrines by Miyan Mir, a Qadiri Sufi mystic of Lahore, in 1588. Sikh tradition acknowledges the role of Sufi mysticism in its tradition through the inclusion of Baba Farid’s mystical poetry (Fariduddin Ganj-i-Shakar, a Chishti Sufi saint of Pakpattan who died in 1266) in the Guru Granth Sahib. The Punjabi Sufi saint is also vibrantly present in popular commemorative practices and this intimate relationship between Sikh Gurus and Sufi saints continues to resonate in popular memory well past the Partition.

… one could find Muslim traders and shopkeepers in the heart of the old city like Bazar Sheikhan adjoining Guru Bazar. The Muslim priestly class had also their residential localities in old Amritsar: Kucha Qazian, Kucha Ragian and Rababian who sang and played celestial music were such examples. But Muslims in general had mostly settled in the outermost quarters of the city, close to the wall like katras Khazana, Hakiman, Karan Singh, Garbha Singh.

Historically, the land on which the city evolved was owned by a mixed community of Muslim Syeds, Sheikhs, and Rajputs. The tomb of Syed Fateh Ali Shah, one of the former “owners” of the site, is located outside the fort of Gobindgarh, to the west. The site of Harmandar Sahib was first purchased by the fourth Sikh guru, Guru Ram Das, marked by a small natural ‘pool of water’ which was said to have been a favourite resort of Guru Nanak, founder of the Sikh faith. On the side of this pool Guru Ram Das erected himself a hut. In 1577, he obtained a grant of the site, together with 500 bighas of land from Akbar, on the payment of Rs. 700 akbari tankas to the zamindars of village Tung, who owned the land. Habitation was limited to the periphery of the Harmandar Sahib which was founded by Guru Arjan in 1588. The major expansion of the city took place during the time of Ranjit Singh who got the wall constructed around the city and divided the city into kutchas and katras.

Besides several major Gurdwaras, two important mosques were located in the Hall Bazaar. Pre-Partition, Muslim religious places were also located outside of the walled city. The Jami Masjid was outside the Rambagh Gate, several takias (guest house) associated with shrines of Sufi saint and successors were located outside this city wall; for instance, those of Pir Shah, Bahar Shah, Noor Shah, Jane Shah, Miraj-ud-Din. Some of the takias also had khanqahs attached to them.

According to the Census of 1941, there were 657,695 Muslims residing in the district, whereas their number post-Partition in 1951 was reduced to just 4,585. “The Khojas and Shaikhs among Muslims formed the chief trading class. Khowaja Muhammad Shah and Mian Muhammad Jan, both shawl merchants, were the founder members of Amritsar Municipal Committee…. many of Shaikhs had orchards or agricultural lands around the city in 1935”. The newcomers who resettled in the district were far fewer in number than the outgoing Punjabi Muslims who were residing in the district.  Despite their significant presence, post-Partition historiography does not attest to the presence of Muslims or Islamicate influence in the lives of people of the walled city pre-Partition.

My surveys suggest that many shrines that were earlier under the control of Muslim caretakers (though not all street shrines associated with Sufi mystics had Muslim caretakers) remained desolate for almost a decade post-Partition, at least until 1964, the year in which the Central Wakf Council was established. Even when taken over by a new set of caretakers, restoration of ritual practices took a longer time. Much of these sacred spaces which consisted of mosques, dargahs, khanqahs, takiyas or graveyards remained desolate or were encroached upon and put to alternative private use. However, it is curious to note that dargahs, khanqahs and takiyas associated with major Sufi mystics or local saints of Punjab were either restored of their ritual practices within the early decades post-Partition or were gradually rejuvenated through the agency of some individuals or local community of practitioners of Sufi saint veneration.

The restoration of ritual practice at Sufi shrines was a long-drawn process and involved absorption of the shrines into the transformed demographic milieu as the old patrons had left for Pakistan. Before the Partition, major gatherings and festivities took place at Kotli Shah Habib, the shrine of the saint near Ramdas in the Ajnala Tahsil. After Partition of the Punjab, at least until the 1970s, no such gathering was held; nor was a fair held at the shrine of any other Sufi saint in the district. Gradually, fairs dedicated to saints like Baba Sher Shah Wali started at Gharyala (Patti), Baba Bakhar Ali Shah was held at Khutril Kalan (Ajnala) and Takiya Baba Rodey Shah at Chung (Patti). One should however be wary of representations of religious identities of medieval saints and their shrines as exclusive and impenetrable domains of religious boundaries. Sufi shrines particularly defied these exclusivities.

In the context of Amritsar, urs at one of the oldest shrines, that of Syed Fateh Ali Shah situated outside the walled city of Amritsar, was started in 2004, more than five decades after the Partition. Some of these shrines were major centres of veneration in the pre-Partition milieu. For the people who were leaving their familiar spaces in Pakistan, the location of these shrines at least partially substituted their earlier lived landscapes. The scenario was different for smaller street shrines dedicated to popular Sufi mystics. Such shrines were particularly located in the walled city and resonated the continuity of pre-Partition cultural flows. One of the prominent saints associated with these shrines was Khwaja Khizr or Jhule Lal.

These unique street shrines defy easy classification as Hindu, Sikh or Muslim shrine and practices. These shrines are a blend of pre-Partition and contemporary shrine practices. Khwaja Khizr or Khidr has complex histories associated with the religious traditions of the Middle East and South Asia, traversing trade and trans-regional religious networks. The river cult might have had its origin in the indigenous population and the mercantile communities might have played an important role in its propagation. As a giver of waters of immortality, Khizr is also known as Jinda or Zinda Pir (“one who never dies”), a title which is, however, more often used for Gugga. In many parts of India Khwaja Khizr is identified with a river god or spirit of wells and streams, revered both by Hindus and Muslims.

It is interesting to note that several Sikh Gurus invested in the digging of wells for both ritual and irrigation purposes. Some of the early Gurdwaras associated with Sikhism were also associated with water bodies: Harmandar Sahib at Amritsar (pool of nectar), Baoli Sahib (step well) at Goindwal and Chehereta Sahib (well with six Persian wheels near Amritsar), to mention some that were established in the sixteenth century. Fish survive as an important residue of Khwaja Khizr/Varun devta in water bodies in Gurdwaras of the Punjab. Their ubiquitous presence is a reminder of the significant presence of the cult in the period before the rise of Sikh practices. It is not a surprise that most water bodies, ponds as well as stepwells, associated with significant Gurdwaras have also been associated with the power of healing skin diseases, particularly leprosy. The popular practice of ritual bathing is associated with these water bodies, once again an adaption of earlier religious practices linking bathing with healing and immortality.

Of particular interest are wells (khu) dedicated as shrines to Khawja Khizr or Jhule Lal in Amritsar. Several localities in the walled city of Amritsar are named after wells (khu): Khu Kuhadian, Bombay-wala Khu, Khu Suniarian, Chatti Khu, to name a few. Major shrines dedicated to the saint are located on or along the prominent sources of water, primarily wells of the city. According to an estimate from 1892-93, the drinking water in Amritsar was entirely obtained from around 1,400 wells. Most of these wells are no longer extant but among those which exist, many have shrines dedicated to Khwaja Khizr or Jhule Lal.The ubiquitous presence of Jhule Lal in Amritsar problematises the belief that Jhule Lal is a predominant saint of Sindhis who have negligible presence in the Punjab. In the specific context of contemporary Amritsar, the role of urban mercantile Punjabi Hindus, Muslims and Sikhs assumes significance. Khwaja Khizr thus became patron saint of the bhishtis (water carriers) of the river Indus and its tributaries, protector of boatmen, fishermen, mariners and travelers, and god of water. His sacred shrines are situated at Katra Sher Singh, where it is managed by Rajkumar, and at Khu Kaudiyan, where his shrine is situated along with popular iconography of the “family of Shiva” and Gugga Pir.

In 2007, the practice of organising a qawwali darbar was also started. Since then Daman Sabri, the darbari qawwals of Kaliyar Sharif perform at the occasion. During annual urs organised in 2010 at the telephone exchange chowk, Sufi Rashid Mian (Delhi), Sai Baba Mehshi Shah ‘Chishti Faridi Sabri’ (Batala Sharif) and Baba Gope Shah (Amritsar) were present. The fair is attended dominantly by a on-Muslim audience (except for migrant Kashmiri Muslims artisans who participate) and is organised under the banner of Anjuman Ghulame Chishtiya Sabriya an umbrella organisation of Chishti Sabri followers in Punjab founded by Baba Ghulam Jilani of Kaliyar Sharif that includes Aroras, Brahmans, Khatris, Mahajans, Ravidasias and Valmikis from several religious affiliations. The branch at Amritsar does not consist of Muslims. These commemorative practices play a significant role in the articulation of pre-Partition memory in the streets of Amritsar.

Baba Farid, one of the most significant Punjabi saints also remains alive in Amritsar through commemorative practices. Considered to be the father of Punjabi poetry, his contribution to vernacularity of Sufi mysticism is immense. Farid was a disciple of Qutbuddin Bakhtiyar Kaki whose shrine is situated at Mehrauli in Delhi. Sabir Pak (Makhdoom Alauddin Ali Ahmed Sabir) was a direct disciple and nephew of Baba Farid and founded the Sabiriya branch of Chishti mysticism in western Uttar Pradesh.

This intimate link between the shrine of Baba Farid at Pakpattan (in Pakistan) Punjab and Sabir Pak in Uttar Pradesh finds its contemporary relevance in the spread of the latter in contemporary (Indian) Punjab whose direct relationship with Baba Farid’s shrine at Pakpattan was severed post-Partition. Baba Ghulam Jilani had been a frequent visitor to Amritsar post-Partition and also played an important role in organising Sabiri fraternity in the city through the circulation of mystic literature, ideology (via ritual intermediaries and musicians) and a wider network of shrines from Amritsar, Batala to Patiala.

Commemorative practices have also found expression in the foundation of a minor Valmiki shrine in the memory of Baba Farid that was laid near Lahori Gate on 25 December 2007 and a chirag (lamp) was lit by Baba Ghulam Jilani. Harish Sabiri has been instrumental in establishing this shrine. Morning and evening prayers at this shrine are performed in the Sabiri tradition. Every year on the same day an urs is organised by the community of the area which comprises primarily of Dalits. The youth of the area organises regular pilgrimage to several places associated with Chishti Sufis like Kaliyar Sharif (Roorkee), shrine of Shamsuddin Panipatti and Bu Ali Qalandar (Panipat), Nizamuddin Auliya (New Delhi), Muinuddin Chishti (Ajmer). Several Dalit families of the locality have been venerating pirs for several generations and have dedicated a corner of their house to pirs. These commemorative practices have an important link with pre-Partition memory.

A shorter version of this article was earlier published in The Tribune.

Meeting of Hearts – Opening of the...