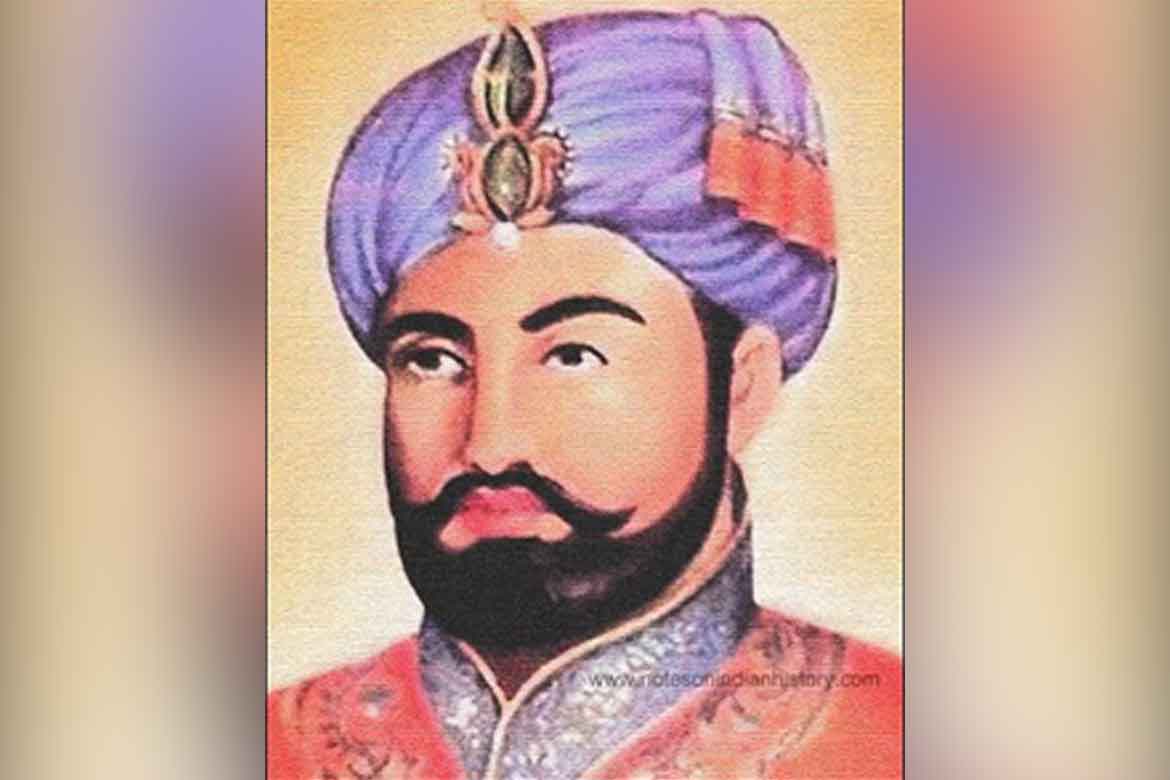 Daulat Khan Lodi (1458-1526) is an interesting historic person particularly from the Sikh perspective and the sub-continent’s history as he was the first – and the only – employer of Guru Nanak Dev, as  store keeper of the state granary. Bhai Gurdas in his Vaar 11, which lists eminent Sikhs of Guru Nanak Dev ji’s time, includes the name of Daulat Khan Lodi. This piqued my curiosity to further explore the life of Daulat Khan Lodi, who from being an employer, later became a revered disciple of Nanak.

The designation of Nawab Daulat Khan Lodi as a living pir by Bhai Gurdas drove me to further learn research on him. Unfortunately there is not much written documentation available on his life, but we are aware that his father Tatar Khan,  had received Sultanpur as his estate (jagir) from General Sayyad Khijr Khan (1414-1421).

But let us first begin with some known incidents associated with Guru Nanak Dev ji at Sultanpur, and then go beyond on historic situations not commonly known.

During those times, farmers would pay taxes on their revenue in kind and not in cash while  Government servants were similarly compensated. The Modi was responsible for keeping an account of all in-coming and out-going provisions, was authorised to sell surplus grains in the market and deposit  cash in the treasury. In fact, the entire Government system was dependent on efficient performance of the Modi. Honesty of this person and his fairness in dealing with people, plus administration of the staff were prerequisites for the position of Modi.

The Afghan noble Daulat Khan was then Governor of Jalandhar Doab with Sultanpur, a town in present day Kapurthala district, as its capital.  The Governor of Punjab, based in Lahore, at that time was his father, Tatar Khan Lodi. One of his ministers, Jai Ram, was married to Guru Nanak`s sister, Nanaki. In 1494 Jai Ram secured employment for young Nanak as keeper of the Nawab`s granaries and stores at Sultanpur. Guru Nanak applied himself diligently to his duties, impressed everyone with his gentleness and open generosity. Daulat Khan was very pleased with the feedback that he got on his new honest working Modi.

Within a short time, the honesty, compassionate nature and noble character of Guru Nanak became widely known. It also became common place that as Guru ji was weighing provisions, he was repeating the word tera,  would go into a sort of trance, forgetting the weighing. Some corrupt persons at the store who had been kept at a distance Nanak saw their opportunity to steal and so began gossip against for having squandered state assets and in failing to keep proper accounts. The rumours soon reached Nawab Daulat Khan, who instituted audits to check on the inventory as recorded in the ledger books. However, on completion of  physical checks,  it was established that the store’s inventory and books completely tallied: the accounts were correct. In fact,  if anything, the state actually owed money to Nanak!

Even if Nawab Daulat Khan had had some suspicions as per his past experience with others,  he now had an even greater regard for Nanak, his new Modi. The audit of accounts did not uncover anything wrong and Nawab’s faith in his ‘Modi’ grew exponentially.

Nanak’s daily routine in Sultanpur included bathing in the river Bein before he sat in deep meditation under a Ber tree. One day, Nanak disappeared while bathing in the Bein and reappeared only  three days later. On the morning of 25 August, 1507 Nanak then walked some miles away to a graveyard outside Sultanpur which he then made his new abode. Nanak’s disappearance had however sparked  rumours, including that he was absconding because of recklessly giving away grains for free. The news of Nanak’s miracle spread like wildfire and people rushed to the graveyard. The Guru’s first words were that “there is no Hindu and there is no Muslim”. This utterance was considered as heretical and, soon reached the Nawab, who sent a messenger asking Nanak to come to his court, but the messenger returned without Nanak.

So on behalf of the Qazi, the Nawab went to the Guru, asked if the Qazi was a Muslim or not? Nanak  defined the traits of a true Muslim, which was later to be enshrined on page 141 of Guru Granth Sahib. The Nawab asked that then if there was no difference between a Hindu and a Muslim, why then would Nanak have any issue in offering Namaz with them?  Nanak agreed and went inside the mosque with them. After completion of prayer’s, the Nawab asked Nanak why he had not joined in the prayers,  who replied, “Nawab ji! Whom would I have joined in prayers? You were here only physically while mentally you were in Kandahar purchasing horses.”

The Nawab countered, “You could then have joined the Qazi !” Nanak responded, “Dear Nawab! Qazi was mentally concerned looking after a new born filly at his home.” The Qazi, although surprised, acknowledged this fact and admitted, “My mare gave birth to a foal this morning. While performing my prayera I was worrying about my foal falling into the ditch.” Nanak then said, “Dear Qazi, only prayers performed with the mind and body fully concentrated are those accepted at the door of God.” Nanak  then explained the true meaning and virtue of Namaz. On hearing this sublime hymn, the Nawab fell at Guru Nanak’s feet, saying that “Nanak was a true faqir, whose words mortals did not easily comprehend.”

Nanak now made his momentous decision after heeding to his inner voice. Mankind continued to be separated from each other on the basis of status, religion, creed and race. Nanak decided not to serve in the Modi Khana any longer,  resigned and soon began his travels to far distant places to spread his message of universal brotherhood. After the call, hecleft for his first long journey or Udasi. After Guru Nanak returned from his first journey in 1515, his first stop was at Sultanpur where he spent five days meeting his beloved sister Bebe Nanaki and Bhai Jai Ram. Daulat Khan came to visit Guru ji and pleaded with him to stay back in Sultanpur. In an outburst of affectionate admiration, the Nawab even offered Nanak all his authority and vast estates. Guru ji, however, had no interest in temporal possessions.

The transformation brought by Guru ji in Sultanpur is summed by Bhai Gurdas Ji in one  sentences:

Sultanpur is the treasure house of devotion (and devotees).

Thereafter, Guru ji continued to Talwandi via Lahore to meet his parents and soon began his second journey, after spending 2 months in Talwandi. After completing the second Udasi, he returned to Sultanpur in 1518. The next day Bebe Nanaki breathed her last, as if she was only waiting for return of her beloved brother. Bebe Nanaki had expressed her wish that Guru ji perform her last rites.

“Over time, Daulat Khan had become the Governor of Lahore succeeding his father. At the time of Sikandar Lodi’s death (1517), he had opposed Ibrahim Lodi’s accession and remained alienated. Daulat Khan was an uncle of Ibrahim Lodi and very pained by the ruthless killing of innocents in Delhi, unleashed by Ibrahim Lodi upon assuming power. According to SM Latif’s book History of the Panjab “….a Faqir whose tenets were different both from Koran and the Vedas, was openly preaching to the people, the importance which it was assumed, might in the end, prove serious to the State. Guru Nanak was imprisoned for seven months where he had to grind corn as hard labour.”

It is likely that this treatment of Guru Nanak riled Daulat Khan and he now even more staunchly opposed Ibrahim Lodi.

In 1523, Ibrahim Lodi’s suspicions grew on Daulat Khan then Governor of Lahore, whom he summoned to Delhi. However, fearing for his life, Daulat Khan sent his son Dilawar instead. This angered Ibrahim, who sent Dilawar into the dungeons where many former nobles were now hanging from the walls. Fearing that same fate, Dilawar managed to flee back to Lahore. After hearing the terrible tales from Dilawar, Daulat Khan felt that his only chance  against Ibrahim Lodhi was to seek help from outside, being the Mughal Babur.  Dilawar was dispatched to Kabul, where he was able to enlist Babur’s support.

So, Daulat Khan along with Alam Khan, Governor of the Parganas of Rapri and Chandwar, actually invited Babur to advance into the Punjab, and at this stage Ibrahim Lodi retaliated by evicting him from Lahore. Babur advanced towards  Lahore in 1524 and as he approached the city, it became clear that Daulat Khan was no longer in command. On his arrival at Lahore, Babur faced Ibrahim Lodi’s Army but soon routed them in  battle and then set the city on fire.

Babur entered the walled city in triumph, burning down many bazaars during his four day rampage. After placing Alam Khan, Ibrahim’s rebel uncle as the governor, Babur continued on to Dipalpur. In 1524, Daulat Khan met Babur here but there began a rift between them over sharing of territory in the Punjab. Babur offered Jullundur and Sultanpur to Daulat Khan – but not Lahore – which the latter did not accept, and went into hiding. However, Alam Khan was soon overthrown and fled to Kabul. Alam Khan joined hands with Daulat Khan Lodi and with Babur’s support, led 30,000 troops, to fight Ibrahim Lodi at Delhi – but was defeated.

In 1526, when Babur again advanced into the Punjab, Daulat Khan fled to Milwat, north of Lahore. Babur laid  siege of Milwat and Daulat Khan finally surrendered. On 21 April, 1526, Babur then faced Ibrahim Lodi in the first battle of Panipat and defeated him, going on to capture Delhi and Agra, thus laying foundation of the Mughal Empire in India. This was end of the Lodi dynasty, with the death of Ibrahim Lodi on the battlefield at Panipat. That this historic battle had lasted less than three hours is  testament to Babur’s strategic planning and execution of war, along with effective use of gunpowder by the Mughals.

Babur appointed Mir Abdul Aziz as the governor of Lahore. Daulat Khan was sent to Bhera but he died on the way. He was a man of refined literary taste, whose personal library was seized by Babur. It can be said that the act of Daulat Khan Lodi in inviting Babur to invade the Punjab may have been borne out of desire for preservation of his own fiefdom, but its outcome was to be tectonic as it ushered historic change in the sub-continent. The Mughal dynasty was established which ruled India for the next 200 years.

But that Daulat Khan remained a true devotee of Guru Nanak Dev ji has never been of any doubt.

Home of the Beloved